Equity market volatility came back with a vengeance over the past month, following a year-long stretch of historically low volatility. Simmering concerns over higher interest rates boiled over early in February following the release of strong U.S. wage growth data. In a span of five trading days the S&P 500 index experienced single day losses of 2.1%, 3.8%, and 4.1%. Prior to this, the last time the index lost more than 2% in a day was Sept 9, 2016. An attempt to recover these losses played out over the remainder of the month, but the last two trading days in February and the initial trading day in March all led to daily losses of more than 1%. For the month of February, the S&P 500 experienced its first negative total return (down 3.7%) in sixteen months.

International equities were not immune to the volatility and fared even worse. The MSCI EAFE Index declined 4.5% in February. Canadian equities fared relatively well, declining 3%, despite the Energy sector dragging on the market due to continued depressed prices for Canadian oil.

The Emblem portfolios capitalized on this opportunity at hand and deployed cash that had been accumulating over the RRSP season into US and international equities. The charts on the following page illustrate the resulting asset mix on March 1, 2018, and the change in asset mix from February 26, 2018. 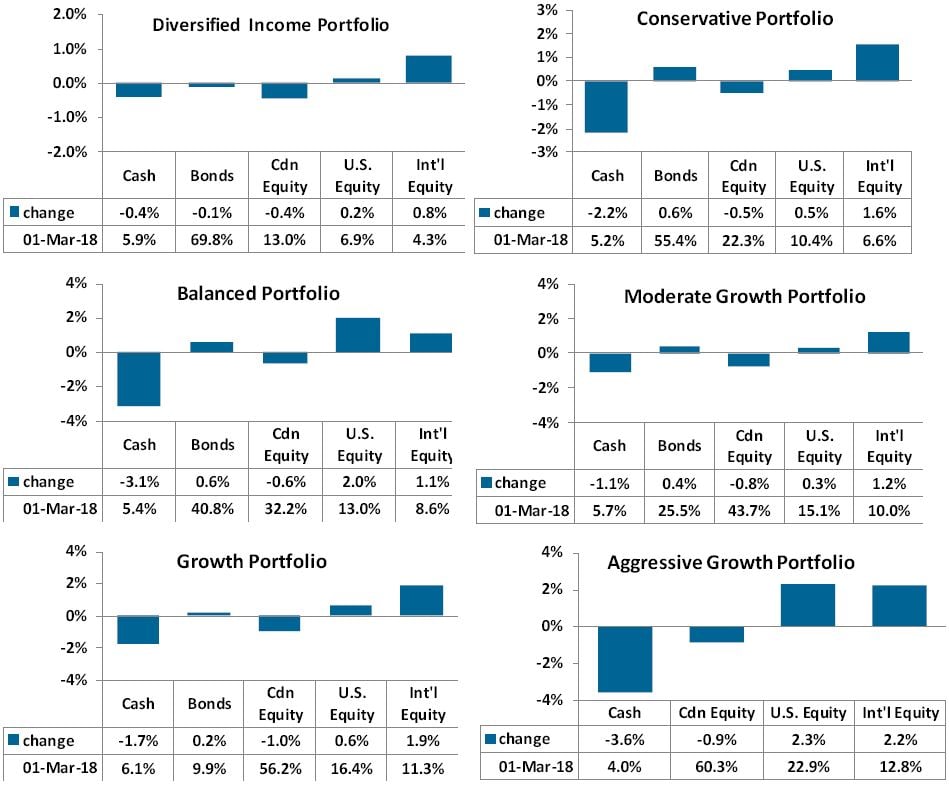 Information contained in this report has been obtained from third party sources believed to be reliable, but accuracy cannot be guaranteed and reflects the views of Empire Life as of the date published. The information in this document is for general information purposes only and is not to be construed as providing legal, tax, financial or professional advice. The Empire Life Insurance Company assumes no responsibility for any reliance on or misuse or omissions of the information contained in this document. Please seek professional advice before making any decisions.

A description of the key features of the individual variable insurance contract is contained in the Information Folder for the product being considered. Any amount that is allocated to a Segregated Fund is invested at the risk of the contract owner and may increase or decrease in value.

Commissions, trailing commissions, management fees and expenses all may be associated with mutual fund investments. Please read the prospectus before investing. Mutual funds are not guaranteed, their values change frequently and past performance may not be repeated.

Policies are issued by The Empire Life Insurance Company.