Corrections: What we can learn from the past

Corrections: What we can learn from the past - May 25, 2022. The Investments team looks at previous market corrections through the decades, the events that followed, and why staying invested through bouts of volatility has proven to be a beneficial strategy for the long-term investor.

Well it’s official. The S&P/TSX Composite Total Return Index entered “correction territory” on May 11th of this year after hitting its peak about a month earlier. A correction is considered a decline of at least 10% from its recent peak. With that move, the Canadian benchmark index joined its US counterpart (S&P 500) in the correction club, the latter reaching that milestone on January 21st.

So what’s next? Is this just a correction or the start of something more concerning? Are we close to the bottom?
Nobody really knows for sure.1

You’ve already likely come across long-term stock market growth charts showing a mostly upward trend, despite various market corrections along the way. The following example shows the S&P/TSX Composite since the turn of the century with the largest declines labeled. Clearly in this instance, staying invested through these bouts of volatility has been the right choice. But again, this is likely something you have seen many times before. 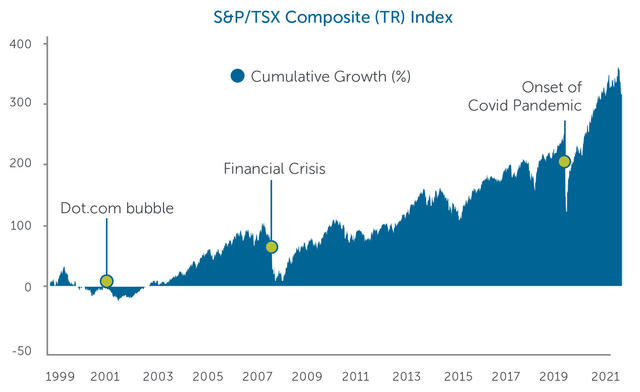 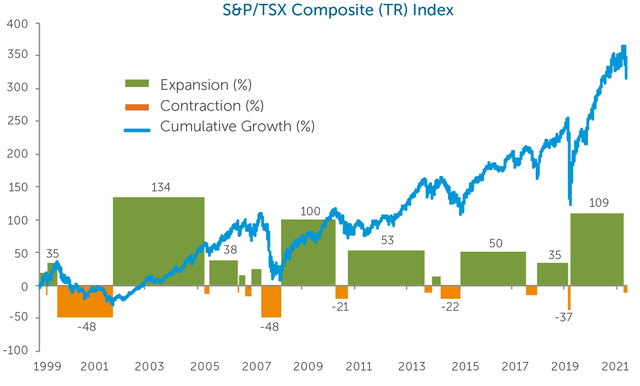 The largest contractions took place following the dot.com bubble’s deflation (-48%), the Great Financial Crisis (-48%), and the onset of the COVID-19 pandemic (-37%).

However, following these deep contractions were some of the strongest recoveries over the period of 134%, 100%, and 109%, respectively. Although it may take a while to reach a bottom and it may not be a pleasant journey, investors with the appropriate time horizon, discipline, and patience have been rewarded by remaining invested.

At this point, some readers may be arguing that this time is different. Canadian investors are currently facing some of the strongest inflation seen in decades and interest rates are expected to rise aggressively in response. Should this trend persist, it could develop into a far different paradigm compared to the past two decades where low inflation and generally falling interest rates supported strong stock market performance.

An interesting comparison may be to look back to the 1970’s and early 1980’s, a period known for high inflation, interest rates and the dreaded economic word—stagflation.

In the 1970’s high oil prices (sound familiar?) on the backs of two oil crises stoked inflation. The crisis of 1973/1974 stemmed from OAPEC’s (Organization of Arab Petroleum Exporting Countries) oil embargo against the United States, which roughly quadrupled the price of oil. The crisis of 1978/1979 saw oil prices roughly double, stemming from strong oil demand combined with a supply disruption in Iran following the Islamic Revolution.2

To combat the rise in inflation, Canadian interest rates rose from ~5% to over a whopping 20% before inflation came under control and back to pre-oil crisis levels. 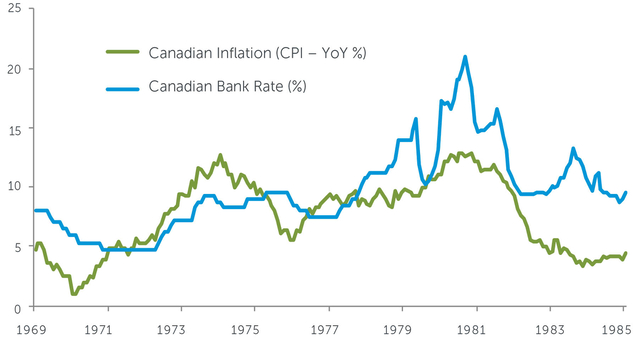 How did this impact stocks? 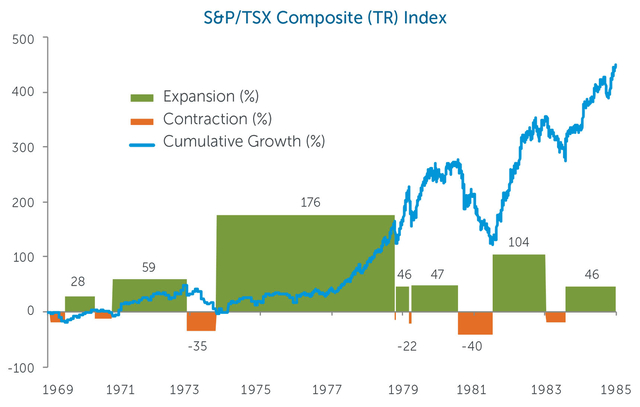 For readers expecting a more challenging stock market environment when higher interest rates and inflation prevailed,
a head-to-head comparison of the two periods may yield “disappointing” results. The average magnitude and duration
of corrections between the two periods were almost identical. Additionally, average recoveries were stronger in the
70’s/80’s and tended to last longer.

So where does this leave us today?

Will investors see an environment of low inflation and interest rates similar to the past two decades or something closer to the inflationary environment five decades ago? Perhaps the answer is “somewhere in the middle”. But, here are a few things to remember:

1 For your personal situation, seek advice from your financial advisor

Policies are issued by The Empire Life Insurance Company. A description of the key features of the individual variable  insurance contract is contained in the Information Folder for the product being considered. Any amount that is allocated to a Segregated Fund is invested at the risk of the contract owner and may increase or decrease in value. Past performance is no guarantee of future performance.