There are many statistical measures available to help evaluate an investment’s performance. Arguably, investors are less sensitive to performance when markets are rising and more sensitive when the markets are falling. Therefore, a measure that separately analyses performance into these two buckets may be a useful component of an investor’s due diligence process.

1. An upside/downside capture ratio equal to 100% means the investment on average moves equally with the benchmark in periods when the benchmark is up/down

Logically, a higher UCR and lower DCR are considered more attractive. However, an investment doesn’t necessarily require a very high UCR or very low DCR to exhibit strong performance characteristics. More important is that the UCR is higher than the DCR, and exhibits a wide and positive spread between the two. A good rule of thumb is to look for a positive UCR-DCR spread of at least 20-30%. For example, an investment with a UCR of 90% and DCR of 65% would result in a positive UCR-DCR spread of 25%, which may be considered attractive.

Like many other performance metrics, a capture ratio is specific to a time period, so there may be different results over a 1 year, 3 year, 5 year, or 10 year time horizon. A longer time period is likely more relevant, so long as there are no extenuating circumstances within that time period, such as a significant change in a mutual fund’s investment strategy or manager style.

A very important factor with capture ratios is the benchmark, because the benchmark directly affects the calculation of the ratio. If the benchmark is changed, the capture ratios will most likely change as well. Broad market indices are often used, such as the S&P/TSX Composite or Canadian stocks, S&P 500 for U.S. stocks, or FTSE TMX Canada Universe Bond Index for Canadian bonds. Non-index benchmarks can also be used, and in some cases may be more relevant. For example, managed assets such as exchange traded funds, open ended mutual funds, and segregated funds entail a management fee (and insurance fee for the latter). Therefore, using a benchmark that also accounts for the reality of investment product fees - such as a fund’s category average1 - may result in a more relevant outcome. An Individual investment may also be used as the benchmark, particularly when directly comparing one investment with another.

The following chart shows hypothetical capture ratios that may be considered desirable for conservative, moderate, and aggressive investors. All exhibit attractive UCR-DCR spreads (the distance between the top of the blue and green bars) and seem to indicate the usage of appropriate benchmarks. 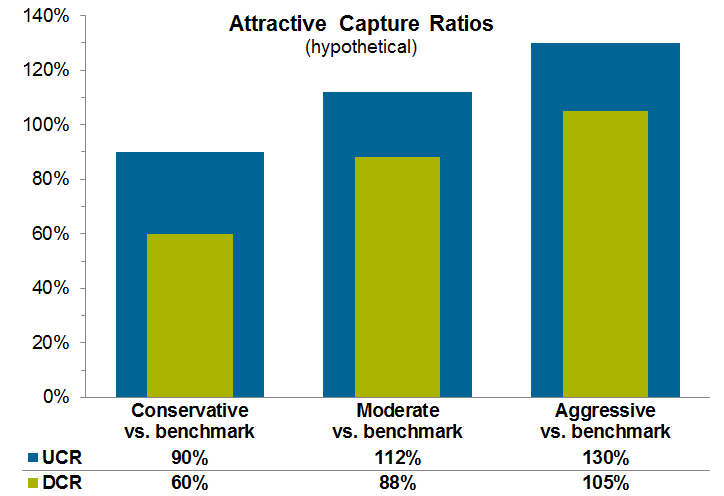 The next graph shows cautionary hypothetical capture ratios, either because of thin or negative UCR-DCR spreads, or because the results seems to indicate an inappropriate benchmark. 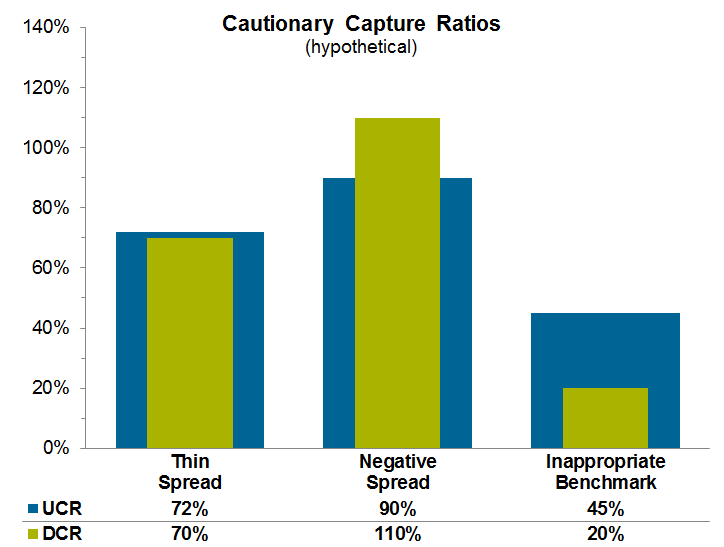 ● A passive index fund should have a negative UCR-DCR spread - a passive index fund’s purpose is to exactly track the performance of its benchmark index before fees (a 100% UCR and UCR). However, after accounting for fees - no matter how small - the result is an UCR less than 100% and a DCR greater than 100%.

1 Most mutual and segregated funds in Canada are assigned to a category of similar funds by the Canadian Investment Funds Standards Committee (see CIFSC.org for more information). Based on these CIFSC categories, category averages are calculated by independent research firms such as Morningstar Research Inc.